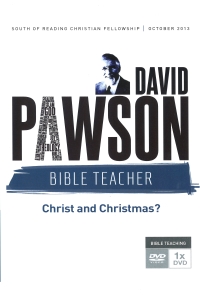 Jesus was not born on December 25, though some believe he may have been conceived then. Mary gave birth nine months later during the Feast of Tabernacles (September). As ’mas’ indicates, this Christian celebration (which Christ never told us to keep) was an invention of Pope Gregory in an attempt to wean British converts from their mid-winter orgy. It marks the ’rebirth’ of the sun after the shortest day, a pagan fertility cult festival whose remnants are still very much with us today covered over with commercial consumerism. In this video David starts with the traditions that make up ’Christmas’ today, how the Church has tried and failed to keep Christmas Christian, and finishes by correcting common Christian inaccuracies that have been perpetuated through our carols and children’s teachings - ’’what the Bible actually says about the birth of Christ’’.